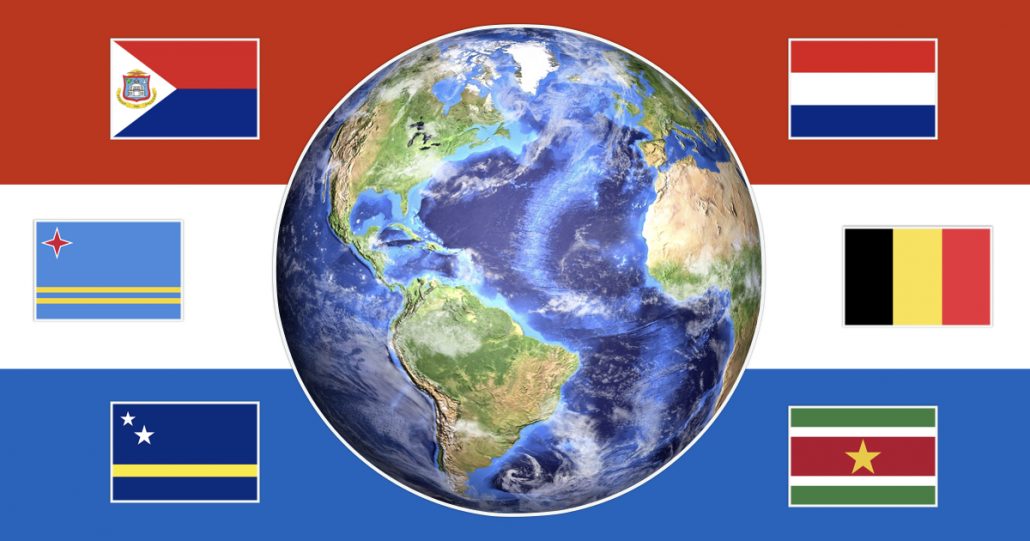 I often hear that people who are learning Dutch think they can only speak it in the Netherlands. Other people know there are more places where people speak Dutch… but they don’t know where exactly.

In this blog I will tell you all the countries where they speak Dutch. So you know where you can practise your Dutch!

They speak Dutch in the Netherlands

Most of the people who speak Dutch (about 17 million) live in the Netherlands. The Dutch language is a West Germanic language that is spoken by around 23 million people as a first language, and about 5 million people as their second language.

There is one other official language in the Netherlands and that’s Frisian (Fries) which is spoken in the Northern province of Friesland.

They speak Dutch in Belgium

The biggest differences are the phonetics, the informal Dutch and expressions. You will hear different sounds in Belgium compared to the Netherlands, especially the further north in the Netherlands you go. The Dutch are notorious for their harde G.

The Dutch are also known for being more informal than the Belgian population. In the Netherlands people will start to talk to you sooner using ‘jij’, while in Belgium people are more used to using ‘u’.

Expressions differ in both countries, for example: vast en zeker (definitely) in Dutch is zeker en vast in Belgium.

They speak Dutch in Suriname

The Dutch language came to Suriname when the capitol Paramaribo became a Dutch colony in the 17th century. To this day Dutch is the official language of the government, business, media and education in Suriname. Dutch is spoken as a native language by about 60% of the population of Suriname, most of them being bilingual with Sranan Tongo and other languages.

They speak Dutch in the Netherlands Antilles: Aruba, Curaçao and Sint Maarten.

Like the colonial history in Suriname, in these countries, also known as the Dutch Antilles, Dutch is the official language along with English or Papiamentu.

So in these 6 countries people speak Dutch and it’s also an official language. But there are more. What about South-Africa?

Do they speak Dutch in South Africa?

If I talk with someone from South Africa, and he is speaking in his own language, I can fully understand him. But officially he’s not speaking Dutch, he’s speaking Afrikaans. The Dutch language of the settlers who came to Southern Africa has evolved into Afrikaans. Nowadays an estimated 90 to 95 percent of the vocabulary of Afrikaans is of Dutch origin. The biggest differences between the 2 languages is that Afrikaans has no grammatical gender and a simpler grammar.

You might be surprised to learn there are more countries where they speak Dutch.

They speak Dutch in Canada

You might not expect it but there are quite a few Dutch speakers in Canada. A large group of Dutch people moved to Canada in the early 19th century as settlers. In the fifties, after the Second World War, a number of Dutch people immigrated to Canada to start a new life. These people took the Dutch language with them and passed it on to the next generation. In the Dutch Summer School, we had Canadians with Dutch surnames like Ter Smitte, VanAmerongen and Lange, who learned Dutch from their parents or grandparents.

They speak Dutch in the United States

And then we also need to mention the US. Did you know that there are 4.5 million US Americans of Dutch descent? Of them, 136,000 people still speak Dutch today (according to this report from 2010) ‘Martin van Buren’ was the only US President whose first language was not English. In our Summer School we had US citizens with Dutch surnames, like: Van Brewer, van den Helder, Denhartog and Dykhuis.

They speak Dutch in Indonesia

If we go to the other side of the world, Indonesia, we also find the Dutch language. At the end of the 16th century the Dutch United East India Company Company (Vereenigde Oost-Indische Compagnie, abbreviated VOC) arrived on the islands and became the dominating economic and political power. In the 19th century Indonesia became a colony of the Netherlands and the Dutch language became an official language of Indonesia. After independence the Dutch language lost its power and popularity. If you go there now you will find that mostly older people still speak it.

It’s not only the history of colonies and settlers in previous centuries that means there are Dutch speaking people everywhere. We are a nation of traders, doing business in all parts of the world!

The Dutch are pioneers. Even nowadays! Of course, the large multinational companies have Dutch natives everywhere… but there are also a lot of Dutch citizens who decide to leave the Netherlands and start small businesses in other countries. We even have a television program about it, called ‘Ik vertrek’. Each week they show the story of a family who have started a business abroad. If your Dutch is good enough, I recommend watching it. It shows the real Dutch pioneering mentality!

In fact, I even did that myself!!!

After finishing my studies, I decided to go to Russia, and not because I was offered a job there. I started my own business – a language program for Dutch people to learn Russian – I stayed there for more than 10 years. And the language centre still exists today!

So you see, we spread our language around the world in the past, and we are still spreading it today. And it doesn’t matter where you live, there is usually an opportunity to practise speaking Dutch with someone nearby!

Let me know, do you have the opportunity to speak Dutch where you live?

Who speaks Dutch? 10 famous people of which you didn’t know they speak Du...
Scroll to top