Ja toch niedan?! – Learn how to speak Dutch like a Rotterdammer and my top things to do in Rotterdam 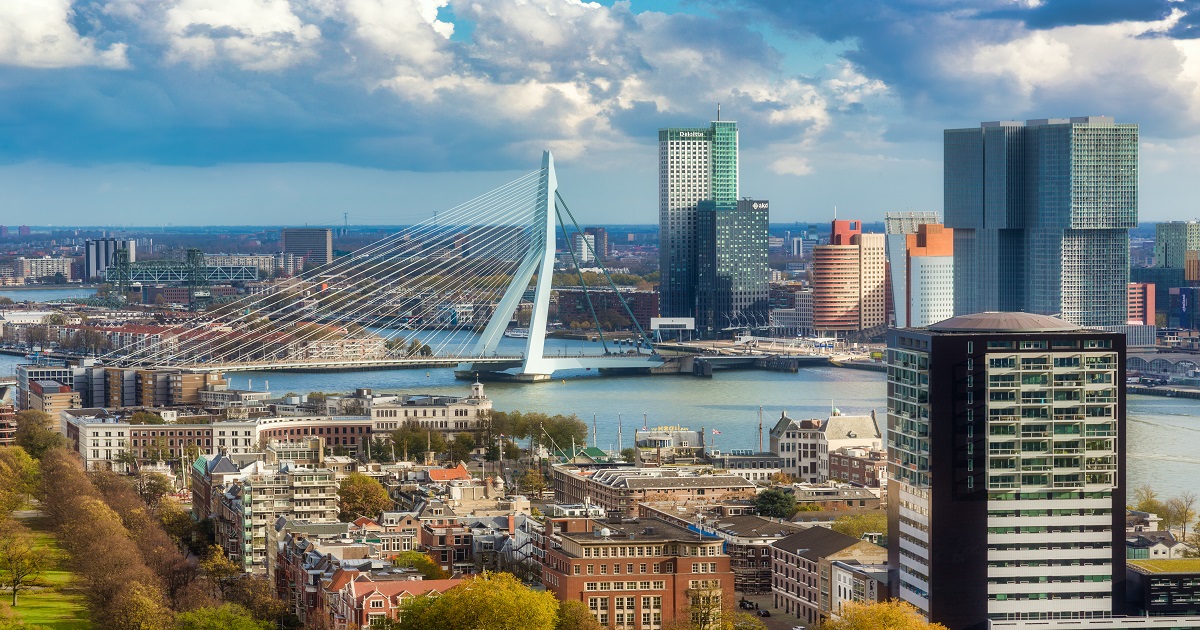 After the positive reactions to my blog about things to do in the Netherlands, I’ve started a series of blogs about cities and places. In my earlier blog I talked about Utrecht.

Today I want to tell you about the language of and the things you can do in Rotterdam.

For this I don’t just use my own experiences. During the summer school, I’m surprised to find that students give me great advice for things to do in my own country.

If your image of the Netherlands is based on the canals and small old houses of Amsterdam and Utrecht, then you’re in for a surprise. Rotterdam is nothing like that!

The main reason for this is that Rotterdam was heavily bombed at the beginning of the Second World War. These bombings destroyed almost the entire city. After the war, Rotterdam was slowly rebuilt. Eventually, the city developed an architectural policy and the creation of new office buildings, apartments and bridges began.

This resulted in its famous skyline.

Rotterdam is different from the other big Dutch cities because it’s a city that is all about innovation and transformation. Particularly in the last few years, the city has gained a lot of positive attention and popularity. Not only is there an increase in the number of tourists,

Rotterdam has been discovered by Dutch people as a great city to live in.

Learn Rotterdams: What is the typical Rotterdams dialect / accent

If you talk to a real Rotterdammer you will hear that he uses the diminutive a lot, but not the way you have learned. The diminutive is pronounced [ie] instead of [je].

The [je] as in the personal pronoun of the second person is also often pronounced [ie].

Putting a [-t] at the end of verbs or other words is also a typical Rotterdam thing to do.

And in other cases we find the opposite

So you want to go and practise your Dutch?  Or just visit the city? Here is my list of things to do in Rotterdam

What are the things to do in Rotterdam?

This seems like an obvious thing to recommend when visiting a big city. But in the case of Rotterdam I really would advise you just to walk around and have a look at all the architecture.

The former docklands at Kop van Zuid, the cube houses, (built in the 1980’s by architect Piet Blom) and Central Station, are just some examples of exceptional architecture you won’t see in any other city.

And don’t forget to go to the iconic Erasumusbrug (Erasmus Bridge) and the highly praised and brand new Markthal (Market Hall).

You can take the elevator up and enjoy a wonderful 360-degree view of Rotterdam.

Rotterdam is also known for having some excellent museums. I’ve picked two of my favourite museums in Rotterdam.

Museum Boymans-van Beuningen is considered one of the best museums in The Netherlands, and I totally agree with this.

The permanent collection of the museum holds the best art throughout the centuries. There are famous Dutch artists like Rembrandt and Van Gogh. But there is also a big collection including works by Magritte, Dali and Man Ray. If you wanted, you could spend the whole day here.

The other great museum is the Maritime Museum.

In the centre of Rotterdam, near the Markthal and the Cube houses, there’s the Maritime Museum. This museum has a huge collection of cartography, maritime memorabilia and art and is one of the biggest maritime museums in the world.

It’s no surprise that this museum is in Rotterdam, because the city has always been associated with water. It is located between the North Sea and the Maas.

Even if you’re not a big maritime enthusiast, this museum is still worth a visit. It’s a place full of interesting objects relating to the maritime world and its artefacts.

Christmas in the Netherlands – How do the Dutch celebrate Christmas?

Groningen! – What is it like and how do they speak Dutch?
Scroll to top