Going to the Netherlands? Be aware of these 8 strange laws! 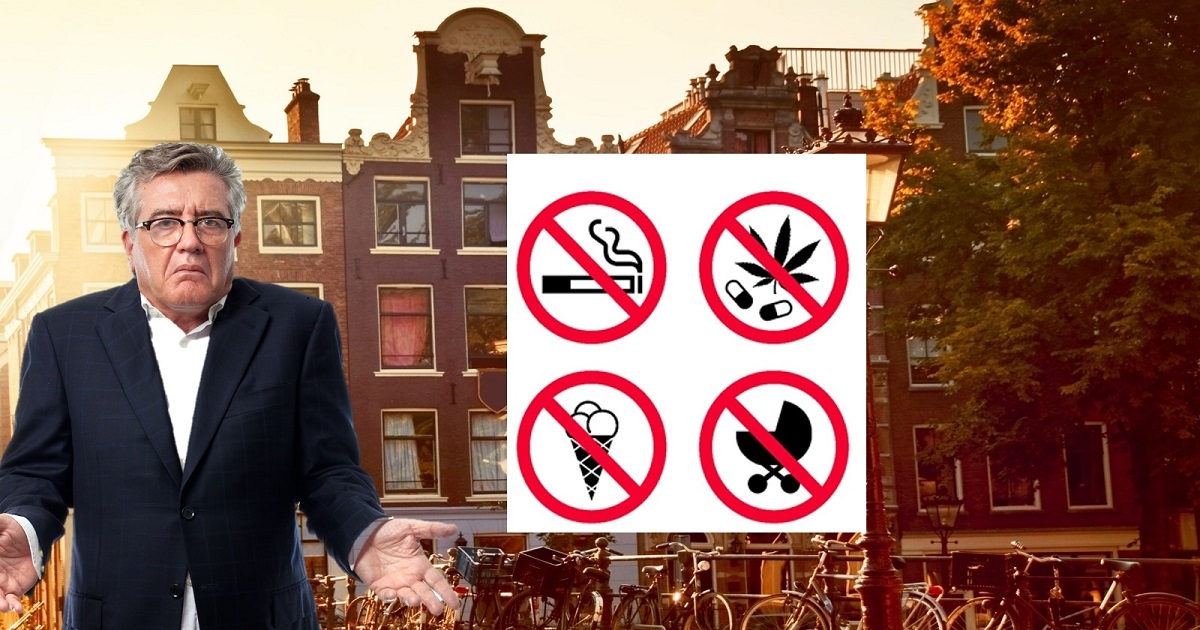 There are a lot of things you have to keep in mind when moving to the Netherlands or Amsterdam. In this blog I wrote about the most important things you should know.

Today I focus on the fact that the Dutch police are your best friend, and that you want to keep it that way!

This one doesn’t raise eyebrows for the Dutch, but foreigners are very surprised to learn that you are not allowed to smoke cigarettes inside a coffee shop.  You’re only allowed to smoke marihuana! So you could see a sign with:

Because of the liberal policy on drugs and prostitution, the Netherlands (or Amsterdam) are often are seen as synonymous with freedom. But don’t be fooled. It is more restrictive than you may have thought.

For example, it’s officially illegal to smoke cannabis in the street of any Dutch city.

Another example which foreigners are surprised to learn: you can visit the famous Red Light District in Amsterdam, but people will definitely not be pleased if you try to take a picture.

Time for some other laws that are quite surprising in the Netherlands.

Owners of barking dogs could get a fine of no less than…. 130 euro!

Luckily policemen aren’t eager to give a fine. But if you catch one on a bad day, he might give you a ticket. And if he’s in a really bad mood, and your dog keeps barking, the fine could amount to 2,250 euro!

Okay, it is quite understandable that hunting and catching or trapping animals is forbidden. But did you know that you are also seen as a criminal if you collect leaves or reeds and take them with you? And this is not a joke, the fine can be 4050 euros!

Be careful if you go to the forest, because there are more laws.

It is forbidden to visit almost all nature reserves in the Netherlands between sunset and sunrise. So if you want to throw a party, camp or have an exciting date? Watch out because you could get a big fine for doing that!

Someone breaking in into your apartment? Whatever you do, don’t lock him up in your toilet. In the Netherlands it is prohibited to lock up burglars in the toilet. That is seen as deprivation of freedom and it’s a violation of the law.

Some laws are only valid in specific places. In Leiden, for example, it is prohibited to carry a metal detector with you.

You’ve heard about the tradition of Sinterklaas in the Netherlands? In this video you learn what the most important Dutch celebration of the year is about.

Except for one day in the year (5 december), in the city of Deventer you are not allowed to go onto the street dressed up as Sinterklaas!

You would hardly believe it, but in some provinces you are not allowed to chalk on the pavement. Not even a child.

A small rain shower and your work of art or would be quickly washed away. Nevertheless, in many municipalities it turns out to be forbidden to draw something nice on the pavement. Officially you need a permit, otherwise an officer could give you a fine of 140 euros.

Comparing Dutch and English – the 11 main differences between Dutch and E...

Is Amsterdam expensive? All about the cost of living in Amsterdam
Scroll to top