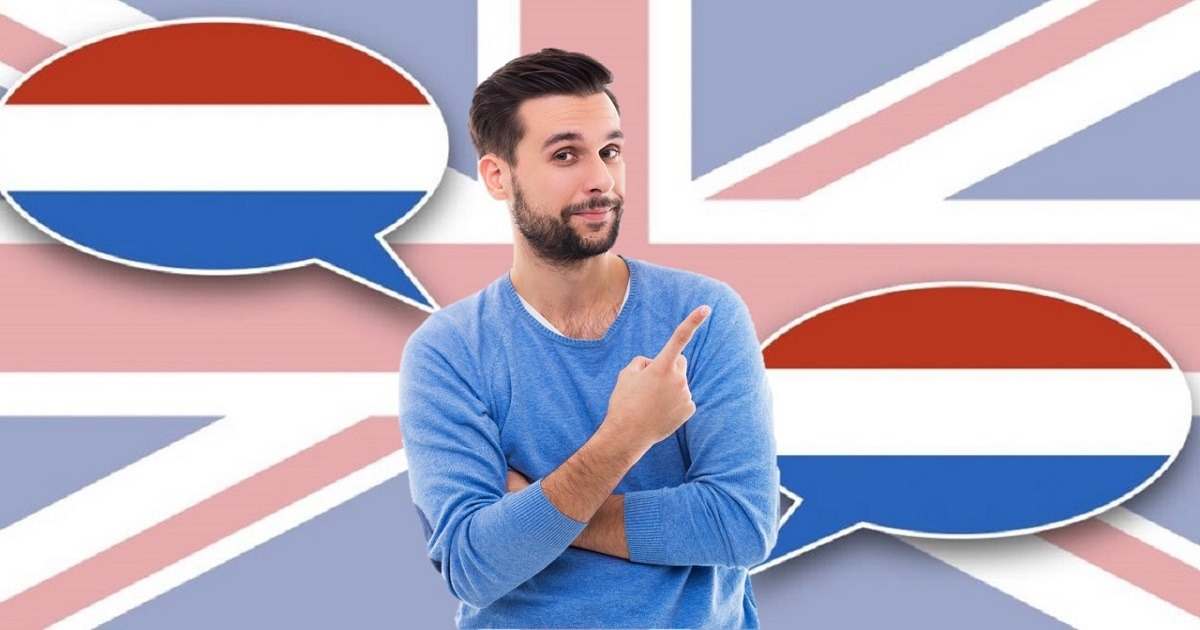 Lots of you are learning Dutch with a background in English. A remark I’ve heard a lot is, and this surprises me: ‘English is so much easier than Dutch’. I’m sorry, but I’m not convinced by this comment. It seems obvious for the people who say this because in most cases their mother tongue is English. I can assure you, no language in the world is logical and English isn’t any easier or more logical than Dutch.

In this article I will look at both languages and point out 11 main differences between Dutch and English.

If you are starting to learn Dutch, you know the alphabet and the pronunciation are very important. And some letters are very confusing in Dutch, if you speak English:

The letter [e] in Dutch stands for the English sound of [a]. So [en] sounds like [and].

Then there are also vowel combinations, diphthongs, in Dutch like ui, oe and eu that are completely new. And also the open sounds like aa, oo, uu and oo.  A bom (bomb) is something completely different then a boom (tree), but this distinction is not easy to hear.

You can find more information about this in the video I made about this.

In English and in Dutch the written text doesn’t correspond with the way you pronounce it. These ways of pronunciation differ from each other.

As you may know, an important difficulty with pronunciation in Dutch is the adding or ignoring of sounds and letters. English is known for completely changing the sounds of letters or letter combinations.

An example is ghoti. What is ghoti? Ghoti is a respelling of the word fish, and you can see the irregularities in English spelling and pronunciation.

You can translate a lot of nouns directly from English to Dutch. But it when it comes to the verb tenses, it is trickier.

For example, talking about activities in the past. In various situations English requires the past simple where Dutch uses the present perfect.

That’s why Dutch people often make mistakes like, ‘ I have played hockey yesterday’.

Another example is the future tense. A normal way to do this in Dutch is using the present tense with an indication of time.

In English it is necessary to use the verb will.

The next point on the list is probably your favorite topic: de and het.

This point is certainly an argument for the people who say that Dutch is more difficult than English. In Dutch there are two definite articles de and het, whereas in English you only have the.

And not only is there (almost) no logical reason for whether it’s de or het, there are consequences to this. For example, the spelling of adjectives.

It works the other way round. Well, at least a little bit. For the indefinite article a or an, in Dutch there’s just one: een. So in English there are two words, compared to one in Dutch. And yes, in this case it’s more obvious when you use the different forms. But still, in spoken language it’s not that easy to apply.

A difference between Dutch and English is that you can find English almost everywhere but as for Dutch, you have to pay a bit more attention to find it.

English is the one of most widespread languages in the world. Besides that, it’s the most widely learned second language.  You can often see English in the Netherlands.

And I mean not only in the centre of Amsterdam; English plays a big role in the Netherlands. In the Netherlands you will also come across English in movies, adverts, music and in universities.

English and Dutch are two different languages from the same family tree, and in the course of time there has been a lot of interaction between the two. Maybe you don’t know it, or maybe you do because you read my blog on this subject, but there’s a lot of Dutch in English.

A couple of my favorite words are rucksack, iceberg and boss. If you’re interested, you can find out more here.

The Dutch culture, and therefore also, the Dutch language is not afraid to accept foreign words or expressions. French and German, but mostly English words, easily find their way into everyday Dutch conversation.

In this blog I talked about a badhairday

I also showed that in the last few years we have seen a lot of English nouns turning into Dutch verbs.

Another example that English speakers can point out if they say English is easier than Dutch. ‘You’ in English, has different forms in Dutch between the informal jij and formal u. Unfortunately, it’s impossible to say what the strict rules are in this case. It has to do with the degree of respect when you talk to a person.

My advice is that when you meet someone for the first time, it’s always better to use u. But if this person is your age or younger it may sound a bit strange.

Let’s go on to a point about spelling.

Days of the week and months aren’t spelled with capitals in Dutch. Just a small difference in spelling but it´s a simple and useful thing to know and good to remember.

Let’s see the last point, and one of my favourites.

When I learn a new language I’m always interested in the expressions. Most of the time they don’t really make sense, but I think they are creative and fun. When you learn some Dutch expressions, and you can use them in the right situation, Dutch people will be surprised.

Some expressions in English have corresponding ones in Dutch for similar situations. Let’s take a look at some examples:

Listen to music to learn Dutch – My top 10 Dutch songs

Going to the Netherlands? Be aware of these 8 strange laws!
Scroll to top