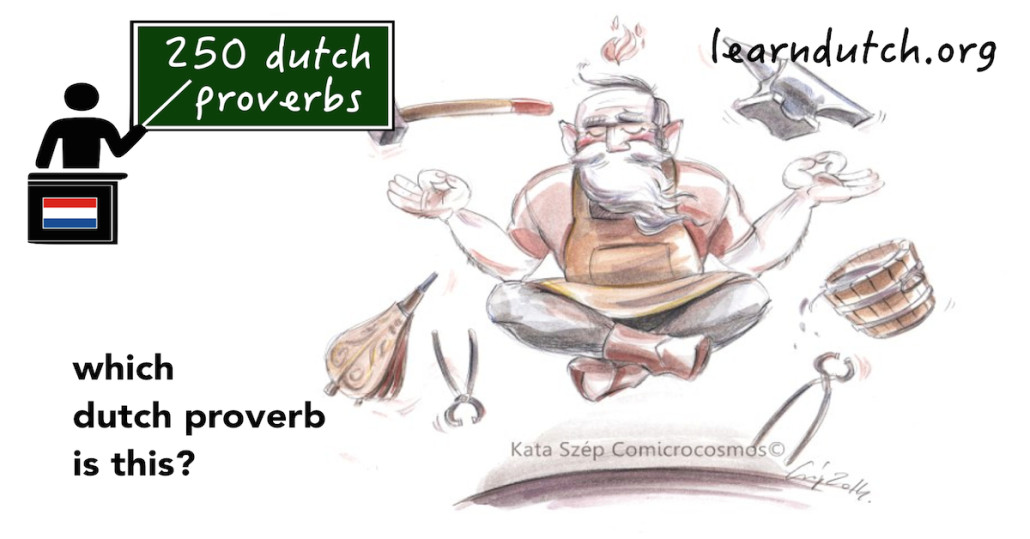 
Transcript of the video lesson (scroll for more text):

And here you see another drawing of Kata from Hungary. It represents 1 of the 10 proverbs of this video. By the end of the lesson, I show you the drawing again. Your task to guess which proverb it is.

Proverb 111 “bezint eer ge begint”
Literally: reflect before you start. I will explain the words “eer” and “ge”. “Eer” you probably know as the translation of honour. But it is also a classical, none frequently used word for “before”. The words “gij” and “ge” are other words for “jij” or “je”. In the Dutch spoken in the Netherlands it can be compared to the English “thou” and is rarely used, while in Flemish “ge” and “gij” are absolutely equal to “je” and “jij” and

are frequently used. More about that in lesson 3 of the course Studio Studeo: Dutch vs. Flemish. This expression we use to warn someone not just to take an important decision. It is a recommendation to think it over.

Proverb 112 “boter op z’n hoofd hebben”
Literally: to have butter on his head. The proverb is used to someone who is criticising others, while he himself could be blamed as well. The original proverb, a few centuries ago, was that one who had butter on his head should stay out of the sun. Because, the butter would melt.

Literally: the secret of the smith. The expression is used mostly in a situation when only a few people know how something is made, for example when talking about some recipe or a piece of handicraft. But you can also use it in another way, as an answer on a question that you don’t want to answer. For example: how did you convince him? Geheim van de smid!

Proverb 114 “iemand een hart onder de riem steken”
Literally: to put someone a heart under the belt. The meaning is: to talk to someone in a very encouraging way. Nowadays the heart is a symbol for love. But in the military, centuries ago, the heart was a symbol for bravery. So to put a heart under the belt is giving courage to those who need it, by virtually placing a heart into the body, on the location where the belt goes from the shoulder to the hip.

Proverb 115 “ergens geen kaas van gegeten hebben”
Literally: not having eaten cheese from it. The expression is used when someone absolutely doesn’t know about it, doesn’t understand or is incapable of doing something.

Literally: to nip in the bud. And that is the same as in English. So you destroy or finish something before it has the chance to get bigger.

Literally: to throw his ass against the crib. The meaning of this expression, is to be rebellious, to do the opposite of what others do. Crib is here used in the meaning of a container for animal food. While others have their head towards the container (in order to eat), the rebel is positioned the other way around.

Literally: it won’t walk away. You say this when there will be plenty of opportunities again to do something. For example, you are very busy on a day where you also scheduled to visit a museum in your hometown… It’s easy to skip, because you can go there any other day as well. So you can say, dat loopt niet weg.

Literally: to shake something out of your sleeve. The meaning is to do something difficult very easily or to come with a great solution or idea just like that. It is dated from the time that people wore very wide sleeves and often tend to hide something in it. So they just had to “shake” to come with something.

Literally: it stands like a pole above the water. You use this expression to stress something is obvious. So if someone won a competition, beating the rest with obvious figures. Than you say. Hij is de beste. Dat staat als een paal boven water.

So, that’s it for today. Again you know 10 more Dutch proverbs.
I put a heart under your belt to go on. In the end of this course you will know the proverbs you need to know. That stands like a pole above the water.

Do not forget to share this video on social media, and to put thumbs up in YouTube. See you back in lesson 13 of 250 Dutch Proverbs.