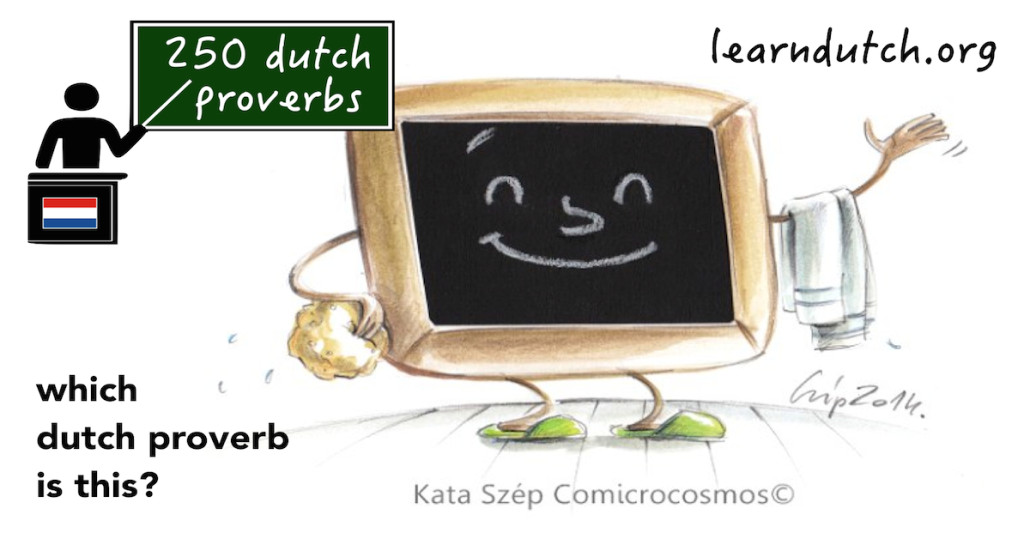 And here you the drawing of today of our student and graphics designer Kata. It represents 1 of the 10 proverbs of this video. By the end of the lesson, I show you the drawing again. Your task to guess which proverb it is.

Proverb 141 “in het land der blinden is eenoog koning”
Literally: In the land of the blind, the one-eyed man is king. The meaning is that in an environment, amongst others with a certain disadvantage or disability, the one with the mildest disadvantage or disability is the best. It is not specifically referring to people with a handicap. It is often used in a situation where is lack of competition, so even someone who is not an expert can win the competition. For example, you are a chess club member, but one of the worst players in the club. Now you are in a group with friends (who are not playing at a chess club at all) and you play chess with them. So, obviously you win easily. Then the group of friends is “het land der blinden” and you as the worst chess player of the chess club – are the king of chess of group your friends.

Proverb 142 “zijn eigen glazen ingooien”
Literally: to break your own windows. The meaning is that you undertake an action as a result of which you suffer yourself. For example, a shopping mall decides to charge money for parking the car. But as a result, the clients go to another shopping mall.

Proverb 143 “als twee honden vechten om een been, gaat de derde er mee heen”
Literally: when two dogs fight for a bone, then a third dog will take it. Attention: “been” can be translated as “leg”, but it can also mean “bone” (another word in Dutch is “bot”). By the way, when you use “been” in plural – you can see the difference. Been as leg in plural is “benen”. And been as bone in plural is “beenderen”. Back to the proverb. The meaning is that a third party usually gets the benefit when two other parties are too busy struggling with each other. It can be used both in the sense that they do not take too much attention to the competition with the third party. It can also be that because of the struggle both parties got weaker, and as such the third party (which was initially the weakest) now has become the strongest.

Proverb 144 “met een schone lei beginnen”
Literally: to start with a clean writing slate. You use this expression after a troubled past, which is now left behind. To have a fresh new start.

Proverb 145 “met iets in de maag zitten”
Literally: to have something in the stomach. It is used when you have a nagging feeling. For example in case of some tension with a friend, something that you need to confess, or just something you worry about. You usually use this expression to indicate that you want to do something about it. “Ik zit er mee in mijn maag, misschien moet ik hem bellen”. Maybe I should call him.

Proverb 146 “achter het net vissen”
Literally: to fish behind the net. Well, this proverbs shows that we are not only farmers, we are also fishermen. Behind the net is a place where is not the fish. So the meaning of this proverb is that you missed some nice opportunity. If you are standing in line to get a free CD, and the person who is in front of you, gets the last one. “Dan vis je achter het net”.

Proverb 147 “hij is niet voor de poes”
Literally: he is not for the cat. The expression is used when a person is assertive, and gets up for his own interest. A mouse or a bird, when they are caught by the cat, usually do not have a chance, and they are powerless. So NOT being for the cat, means that someone is not powerless.

Proverb 148 “de poppen aan het dansen hebben”
Literally: to have the dolls dancing. Although this expression seems to indicate a nice event, it is actually the opposite. You can use it to indicate a scandal emerged. For example, if some fraud was discovered and it appeared many people where involved, then the “dancing dolls” refer to the process of investigation, the blaming, the tensions etc. You can also use it to indicate the start of a major quarrel or dispute. For example, a municipality announces to reconstruct a residential area, of course then the dolls start dancing; because there will be a major dispute with the current inhabitants.

Proverb 149 “ergens een puntje aan zuigen”
Literally: to suck a tip on it. The expression is used to state something is extremely good. You usually say it to one person, when talking about the achievements of someone else. To stress what the other has done, should be taken as an example, as it would be hard to beat that achievement.

Proverb 150 “wie de schoen past, trekke hem aan”
Literally: Let those whom the shoe fits wear it. The expression can be used in a situation, when someone criticises a whole group, because probably some members do not act as they should do. You don’t want to find out who is to blame. But you want to say, that those to whom the criticism is addressed, they know it, and they should change their acting. For example, let’s say in the office where you work, the toilet is often not flushed. You say that to the group, and you conclude with “wie de schoen past, trekke hem aan”. You hope that the one who doesn’t flush the toilet recognises himself as being guilty, and changes his behaviour.

If you came up to here, other people can suck a tip on that achievement!

Do not forget to share this video on social media, and to put thumbs up in YouTube.
See you back in lesson 16 of 250 Dutch Proverbs.