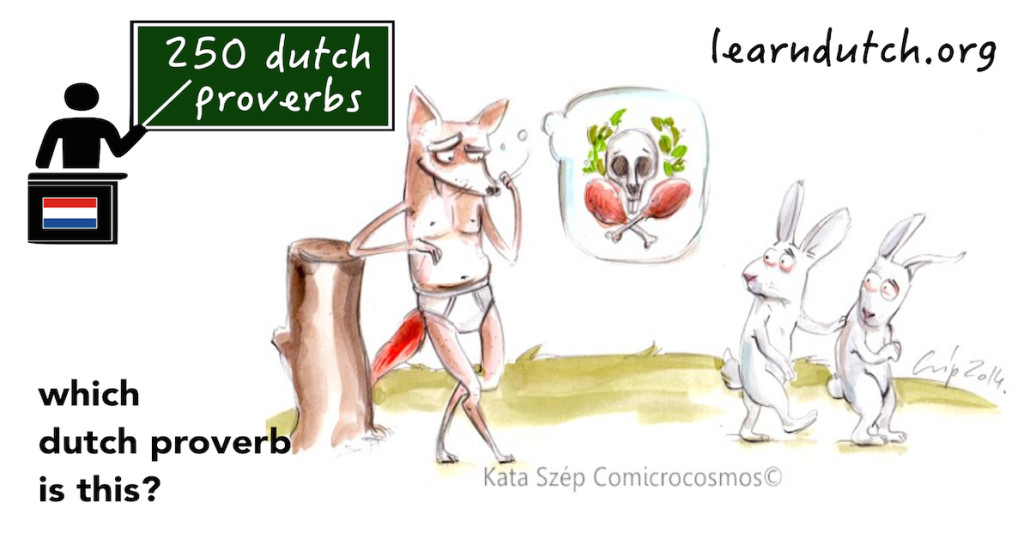 Proverb 192 “een oud paard van stal halen”
Literally: to get the old horse out of the stable. The meaning is to dig something up again.

Proverb 193 “de touwtjes in handen hebben”
Literally: to have the ropes in the hands. The meaning is to be the boss. The word ropes refers to the reins to direct a horse (in Dutch: teugels). You can use the proverb also as “de teugels in handen hebben”.

Proverb 194 “iemand om de tuin leiden”
Literally: to guide someone around the garden. The meaning is to cheat someone. Actually the word “tuin” here, is not the plot of land next to your house, but the meaning it had in the middle ages: a fence. So guiding around the fence, means that you don’t give access to the truth.

Proverb 195 “na regen komt zonneschijn”
Literally: there will be sunshine after the rain. The meaning: after a bad time, there will be always a better period.

Proverb 197 “zich op een hellend vlak begeven”
Literally: to move on to a steep surface. A better translation of “hellend vlak” is actually a “slippery slope”, and refers to a certain way of logic in a debate. It is used when someone suggests a causality (without any ground) or exaggerates a correlation. For example, if raising the pensions appears to be good for the economy, why we do not double the pensions, it would be even better.

Proverb 198 “iemand achter de vodden zitten”
Literally: to chase someone’s tatters. The expression is used, when someone needs to be instructed to work harder. Usually when a person is lazy by himself, and only does something when you continuously remind him about his duties. Then you say: “je moet hem achter zijn vodden zitten”.

Proverb 199 “weten hoe de vork in de steel zit”
Literally: to know how the fork is attached to the stem. The meaning is that one understands perfectly the whole situation.

Proverb 200 “een vos verliest zijn haren, maar niet zijn streken”
Literally: a fox may lose his hair but not his cunning. The meaning: people may get older, but they rarely change. The expression is often used to talk about someone who did something wrong in the past, as a warning that it may happen again.

So, that’s it for today. Again you know 10 more Dutch proverbs.
Get everything out of the closet to finish this course. I hope I don’t need to chase your tatters.

Do not forget to share this video on social media, and put thumbs up in YouTube.
See you back in lesson 21 of 250 Dutch Proverbs.